Last wednesday, after a morning introducing the delights of Illustrator’s mesh tool to my first years (Hi guys!) I dashed off campus to catch the 10.59 to King’s Cross. I reached the train doors as it was just starting to move, and hoping that I could make a dramtic leap onto the moving train at the end of the platform (just like in the old movies) I realised that I was a bit hampered by a couple of things. Firstly, as an unfit, overweight forty-one year old, I was seriously not up to the job of chasing a moving train twenty yards, let alone the length of the platform! Secondly, the doors were firmly locked as I furiously jabbed at the button, and lastly, there was a rather large Guard making his way to intercept me.

After a short interval where I recovered and reduced my heartrate to a less dangerous level, and a much longer one as I waited for the 11.59, I considered my plans for the day. This was a rare treat; to head out midweek for a bit of CPD and recharge the old batteries, instead of chasing endless paperwork.

My main reason for going was to attend the Brody lecture, but this being an evening event, that left a good amount of time for some other stuff. I had recently found out about a small exhibition of posters by Alan Kitching and Celia Stothard’s Typography Workshop and was looking forward to seeing some excellent print and typography. I was also planning to catch up with some ex-students who are now working or studying in London, and was anticipating a bit af good warmth humour.

As I was on a different train to what I had set out for, I was surprised to be intercepted by Christian (ex-student, excellent graphic designer, musician, fim-maker and all round good-egg) as I stepped off, and so we immediately made our way south to Advanced Graphics where the Kitching exhibition was.  Surprisingly, we were allowed to take a good many photographs and had a very pleasant chat with the gallery owner Bob Saitch, who was very knowledgable and unsurprisingly well-connected! Both of us wished we could afford to buy one of the prints. Donations welcome…

Here are the best of my images. As the prints were all displayed behind glass, there is some reflection and glare in these, but I think you’ll get the picture. I think Christian may have got some better ones though… 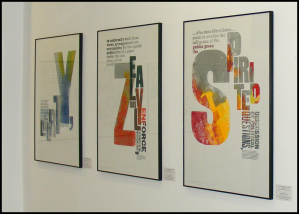 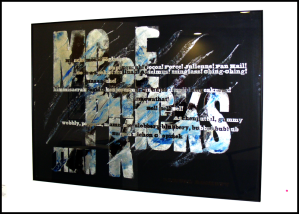 This poster was about A1 and very heavily inked. The white/grey colour you can see in these photos is silver ink. Below is a close up – look at the amount of ink on the inside diagonal stroke of the ‘M’ (click to enlarge). 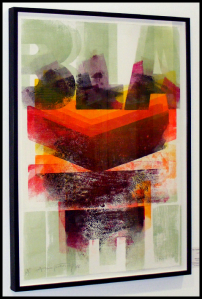 The depth of the overprinted letters can really be seen close up.

And as we left and made our way up to the river through Borough Market we stumbled upon these two billboards under the railway bridge. I was pretty amazed at the co-incindence in the style of what we had just seen in the gallery, and I assumed this was a beautiful coincidence to add some level of importance to the day, but I have since found out that this is indeed Kitching’s work too! (there is a small credit on the second poster) Still beautiful I think – maybe more so!

There are a number of good web articles and portfolios to check out if you are interested. Go be inspired!